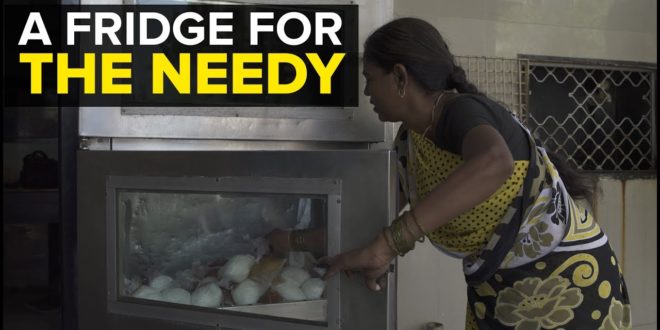 It was Khurana who set up the fridge on May 18 after hearing about a similar one that had been set up by the Versova Welfare Association (VWA) in January.

“The comunity fridge doesn’t only cater to the underprivileged. As this is a commercial hub, loaders, autorickshaw drivers and BMC workers also stop by to grab a bite when they’re hungry,”.

Residents of Morya Classic Society, Oshiwara, not only pay for the electricity that keeps the fridge running, but also chip in with roti-sabzi, fresh fruits and snacks ranging from burgers to vada pavs. “A lot of the food stored here comes from local restaurants, which give us leftovers,” says Khurana.

She meticulously notes the names and numbers of people who drop by with food packets. “We also maintain a record of who our regular contributors are, so we can call and request additional food if we’re running low,” she adds.

This is Mumbai’s second community fridge, after VWA president Gopal Hegde set up the first one just 5km away, near Versova’s Vateshwar temple. “Hegde wanted to create an atmosphere where people could live with dignity and weren’t forced to beg. His second aim was to eliminate food wastage,” says Shyam Kalwani, VWA committee member. Hegde bought the fridge and word-of-mouth ensures that it remains stocked.

“Residents throwing a party often send us their surplus food. Local restaurants also supply us with large quantities of dal and sambhar occasionally,” says advocate Pinky Bhansali, VWA member. Local caterer and VWA member Varsha Bagchandani cooks breakfast, lunch and dinner enough to feed 30 people daily, which ensures that the fridge never runs empty. Residents also give the association monetary donations, which enables association members to buy food. “People sometimes give us donations in memory of a family member or a friend who has died. They then ask us to cook that person’s favourite dish so others can enjoy it,” says Bhansali.

Two CCTV cameras are set up near the fridge and VWA members man the area to ensure that there is no wastage of food.

Kalwani estimates that the fridge feeds around 50 people daily. “I depend on the fridge for my three daily meals. I’m thankful for this initiative,” says Anil Kumar Rao, a Versova resident.

“We plan to ramp up operations by targeting lazy residents next,” says Kalwani, with a laugh. “If you have surplus food, but are too lazy to come and drop it off here, just leave it at your building’s reception desk. We will come and pick it up,” he adds. The association has tied up with Grab, a private firm to carry out this initiative.

Dr Kshitij Mehta, general secretary, VWA, says the association has also identified several spots in the city where more community fridges can be set up.

No Pollution is the only Solution !

Free Education To Over 2,000 Rural Students by an IPS Officer in Jharkhand