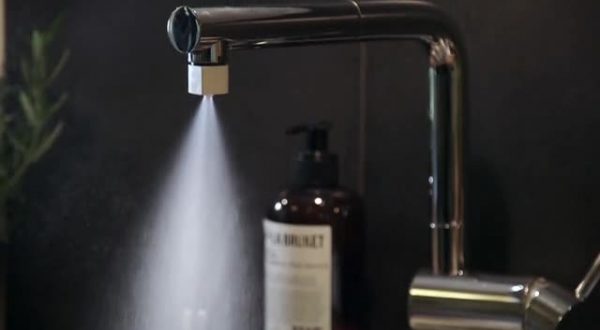 It’s a fact: Earth is in the grips of a global water crisis. According to UN Water around 2 billion people, or almost one-fifth of the world’s population, live in areas of water scarcity. By 2025 more than 3 billion people could be living in water-stressed countries—and 14 countries will slip from water stress to water scarcity.

It’s difficult to change people’s habits. But what if you could change the way water is delivered? Conventional taps allow water to gush out at around 10-12 liters a minute. And most of it is wasted, never contacting hands for washing or plates for rinsing. So, billions of gallons of fresh water runs literally straight down the drain. By “atomizing” water, creating millions of droplets through a special nozzle that emits a high-speed dense mist instead of a heavy flow, significant amounts of water and energy would be saved. That’s what the creators of Altered:Nozzle did. Producing what they call, “conscious design for new habits”. It’s an approach that uses up to 98 percent less water. With nozzle models that retrofit into existing faucets.

The Altered:Nozzle reduces water usage up to an incredible 98 percent. Nozzles have dual functionality and can switch between traditional and atomized flows. What’s more, Altered:Nozzle’s products come in modern designs that fit the interior of any home. In short: they save water, energy and money without sacrificing aesthetics.

For commercial applications, businesses can save a minimum of 80 percent and a maximum of 98 percent of their overall usage. For a business with 100 employees, that means a potential saving of between 470,000 – 570,000 liters each and every year.

Along with water savings, facilities will see a decrease in energy costs because of the significant amount of energy used to heat water. Utility costs vary greatly around the globe. But looking at a business case by the Environmental Protection Agency (EPA) in the US, for a hotel in Texas, savings of 1.226 – 1.472 $ per year are projected for a company with 100 employees. With an estimated investment of 330 USD that means a payback time of less than four months.

If Altered’s innovation, or others like it, penetrates 15 percent of the target market by 2028, the global greenhouse gas emissions would be reduced by 27 million tons of CO2e annually.

NAVisor-a Helmet that turns into a Navigation Device

The Weight of the Glass

Things One Must Know !

Bhagwat Gita and the Coal Basket !